James grew up in London but school holidays spent in Wales kindled an interest in wildlife and the outdoors. By the age of eight he was already collecting old birds’ nests, feathers and fossils, and soon developed an unhealthy interest in fusty museum cases of pinned butterflies and moth-eaten taxidermy. Even so, biology at school was so badly taught that James abandoned it after scraping an ‘O’ level and instead focused on foreign languages. 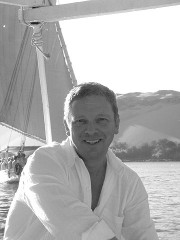 Four years at Bristol University saw James leave with a degree in French & Politics, followed by a return to London and a job in conservation at English Heritage, before the lure of overseas proved irresistible. The possibility of wearing a linen suit and lounging next to a pool drew him to the British Council, and he was soon to be found in steamy Dar-es-Salaam and then equally steamy Muscat. But the excesses of expat life drove him back to university and a Masters in Architecture at York, followed by a series of consultancies in the Middle East.

Since then James has worked mainly in publishing. He specialises in art, heritage and the natural world, but will write on anything that catches his eye or imagination.